The lens I talked about in my last post will be very useful under a lot of circumstances, but there are at least two situation where I'm going to need a longer lens; facial close-ups, and standing in front of my green screen without casting shadows.

So I bought one. 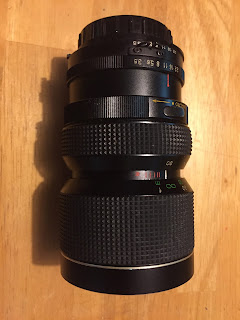 As you might be able to tell, this one is a zoom. I hadn't intended to buy a zoom, but I couldn't find a real bargain in the 60-90mm range I was looking in, and this one was less than $50. It's not a brand I'd heard of before, having been made by Sun Optics. After I had ordered the lens, I looked around for information on it and found that quite a few people are fond of the optics.

When I first got the lens, I couldn't get it to work. It would seat, but not lock into place. Some back and forth with the seller, who was very helpful, led me to think that an extra metal piece on the mount that I haven't seen on any other Nikon lens might be the issue. It was on with only two tiny screws, and when I removed it, the lens mounted perfectly.

And it takes very nice pictures and everything works very smoothly. There's only one remaining problem: it's a heavy piece of glass. So heavy that I worry that it could compromise the camera's mount if I place the camera on a tripod with no additional support. I can't find a collar specifically to fit this lens, so I think I'll be building some kind of tripod mount designed to hold the camera and the lens in concert, which might also serve as an adaptor for my poor-man's SteadiCam home-build.

I'll probably do some hand-held experimenting with the lens before I get to any kind of build, especially with more urgent building projects for my house which have to take precedence. Overall, though, I think that, between the two lenses, I have what I need to start doing the kind of movie shooting that I've been wanting to do for a while.

Now I just need to find the time. Between work and self-imposed book deadlines and a house perpetually under construction, it's going to be a squeeze.

But it will be worth it.

A friend of mine recently made a Facebook post about a wonderful book of sketches, called "He Drew As He Pleased," by Albert Hurt...